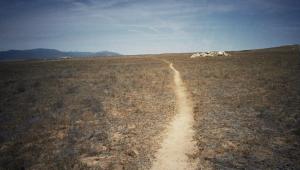 I’ve received a number of comments on a previous post–Hike Your Own Hike (HYOH).  I have hit a sensitive issue, an issue that can easily break up any thru-hike.

I remember two thru-hikers on the AppalachianTrail in ’03. The two middle-aged men were tight when they started, but one always lagged behind the other, and the other was always in a hurry. Somewhere in Virginia, they did the right thing—they split up. What I found interesting was that the hiker in a hurry left the trail for good, about two-thirds of the way; his friend finished. The hiker who finished had become stronger and stronger as he forged ahead at his own pace. He told me that he would have never completed the A.T. if he’d tried to keep up with his friend.

There you are. If you are serious about finishing a thru-hike, then hike your own hike, not anybody else’s. I’ve heard the same type of story many times, and I know you have too. The most common, I believe, is when several thru-hikers of a group insist on going off-trail, or doing something different, than you want to do, and you reluctantly give in. The group pressure gets to you and, before you know it, you are out of your zone and off your game.

This can cost you your hike. HYOH: Hike Your Own Hike!

2 thoughts on ““Hike Your Own Hike” redux”