Meet my grandson, Jack. He was nine years old when this picture was taken and a typical gadget-gamer of our modern age. I introduced him to hiking.

On this day we had climbed Great Blue Hill in the Blue Hills Reservation of Massachusetts. My father used to say that there is a time and place for everything. Today was not the time nor the place for games and gadgetry; we were out to enjoy nature and get some exercise. We had just beat a bus unloading a slew of children, so we got going.

I had two quarters in my pocket, and we made a wager starting out: If Jack saw the first animal, he would get a quarter. “Be on the lookout,” I said.

I showed him the red-dot trail to the summit and gave him the job of following the red dots on the trees while I walked behind. A couple of times he wandered, not finding a dot. “Then, look behind you,” I said. And, sure enough, he saw one which confirmed our heading.

But he was more interested in quarters. “Grandpa, do birds count?” he asked, as he spotted what looked like a crow. “No,” I said.

A few minutes later, he pointed with a wry grin, “What about frogs?”

“Well, I suppose,” and I handed him a quarter. “But I mean a real animal. I’ve got one more quarter if you see something first that’s furry and runs on legs.”

On the summit we snacked and looked around the weather observatory. People were working inside and our national flag waved in the breeze. A biker had pedaled up the auto road and gulped water from his bottle.

I was beginning to think that we might not see any animals, for I hadn’t even spotted a squirrel. On the way down, Jack asked if fish counted as we hiked by a small pond. I just looked at him and matched his wry grin. But  a while later, I saw a blur of something dart to my right.

“Right!” I handed Jack his quarter. 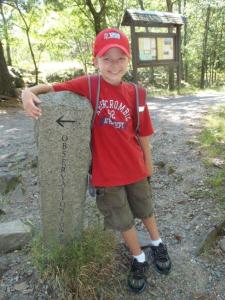 3 thoughts on “Hiking With Jack”