Grizzly bears are aggressive. Black bears, which are found in the east, are smaller and shy away from humans. Being attacked by a black bear is unlikely, but there have been 63 fatal black bear attacks in the United States and Canada between 1900 and 2009.

In any case, grizzly and black bears will do anything to get food. Because of this, there are two things you need to do when you hike in the wilds.

1) Camp for the night several miles beyond where you cooked your last meal.

2) Hang your food at your campsite. 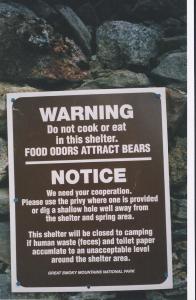 As the sign in the picture says, Food Odors Attract Bears. If you cook and tent in the same spot, you’re asking for trouble. Always. Bears zero in on the odors and will wreck a camp looking for food.

I realize that on the Appalachian Trail and on other trails, hikers will congregate at some of the shelters to cook and camp for the night. I do too. That brings us to the second point. While there is safety in numbers, you must hang your food, and hang it sufficiently high, out on a tree limb (not next to the tree, which a bear will climb). We picked limbs away from tents and shelters, so we could sleep in peace.

From all that I’ve read and seen (saw black bears on four separate occasions while thru-hiking the A.T.), bears simply want food. If you practice these two things–camp beyond where you cook, and hang your food–you will greatly reduce the chances of a dangerous bear encounter.

One thought on “Hiker Killed by Grizzly”